The objective of this meeting was to introduce the Thai Rice NAMA project to the Minister and relevant parties who will be co-organising the project. 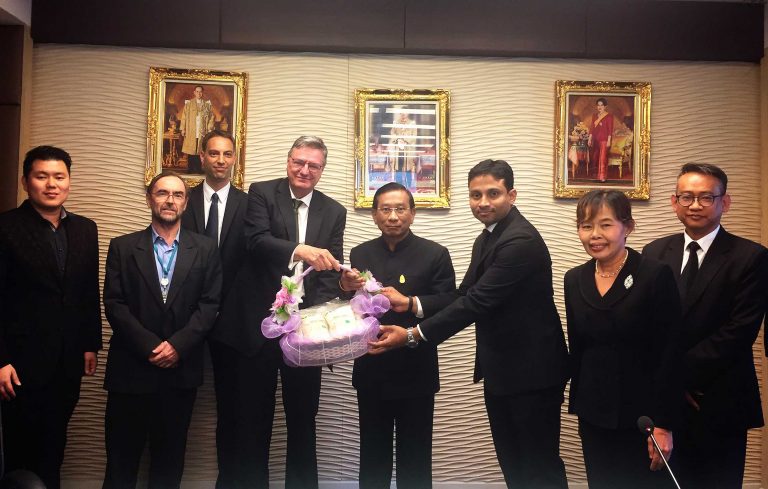 The main partners for the project are GIZ, RD, ONEP and BAAC while the main implementing agencies are GIZ and RD.The rest will mainly focus on providing information.

The agenda of this meeting was to propose the establishment of 1) Policy Advisory Committee; 2) Steering Committee chaired by Permanent Secretary of MoAC; and 3) Working Group in which would be later appointed by a decision of the steering committee.

Supported by MoAC in collaboration with the Ministry of Natural Resources and Environment (MoNRE), the Thai Rice NAMA Project is now in Detail Preparation Phase starting from 19 May until 19 November 2017.

GIZ and RD will work on project inputs and establish RD working group for the NAMA full proposal. 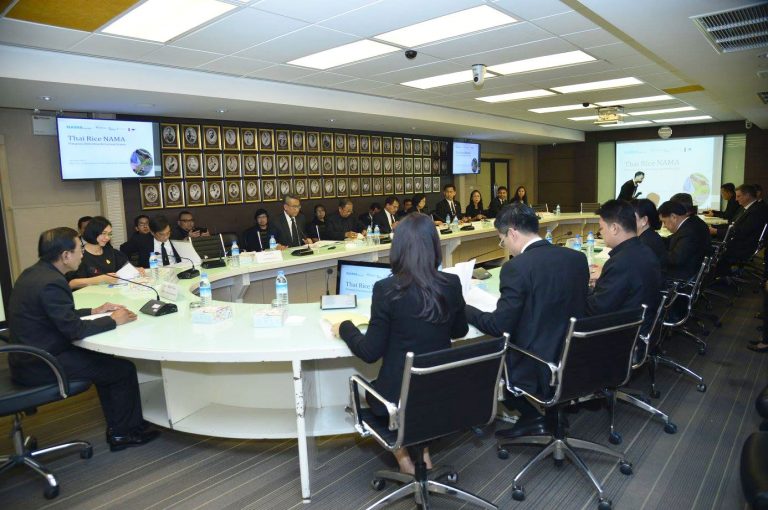 On 4 July 2017, GIZ and RD will organise a workshop on the Thai Rice NAMA to have experts on specific areas to brainstorm on the planning. The objective is to review the existing technology in rice production, and also to seek for alternative technology in reducing greenhouse gas (GHG) emissions from rice production. The topic is about Land Leveling, Alternate Wetting and Drying techniques and other relevant research conducted by relevant agencies. Experts attended will be also from RD, RID, LDD.

The Thai Rice NAMA Project focuses on climate mitigation by reducing GHG emissions released during rice production, specifically Methane (CH4). The project has come about after the Thai Government’s confirmation of support for climate change mitigation and adaptation through ratification of the Paris Agreement in September 2016.

The project proposal was submitted to the NAMA Facility by RD with support from GIZ as co-applicant. Thai Rice NAMA was selected in March 2017 as one of seven projects approved for detailed preparation within the NAMA Facility’s 4th call for proposals.

The project will work with farmers and farmers’ associations in six focus provinces of the Central Plains, namely Chainat, Ang Thong, Pathum Thani, Singburi, Ayutthaya, and Suphanburi (short: CAPSAS) in shifting from conventional to low–emission rice farming, and promote its replication on a national scale and in the ASEAN region. 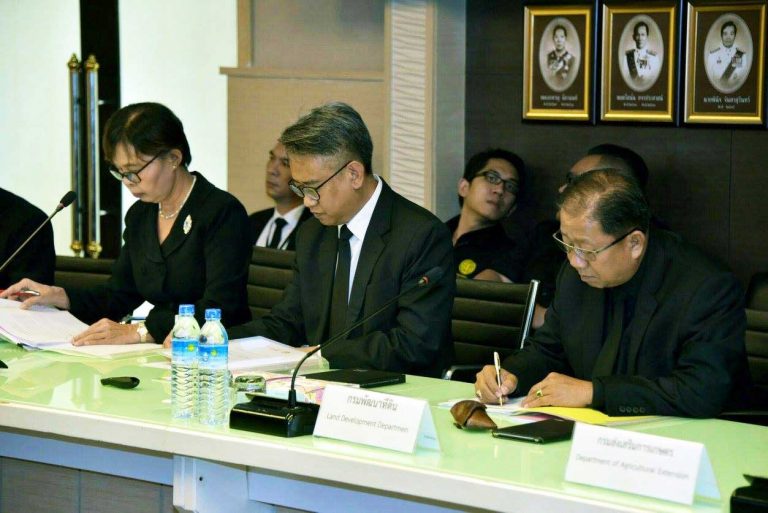 The NAMA Facility was established in 2012 by the German and British Governments and supported by the Governments of Denmark and the European Commission. The NAMA Facility board of donors is currently composed of the German Ministry for the Environment, Nature Conservation, Building and Nuclear Safety (acting as lead donor), the UK Department for Business, Energy and Industrial Strategy (BEIS) (formerly DECC), the Danish Ministry of Energy, Utilities and Climate and the European Commission. The NAMA Facility aims to support developing countries and emerging economies in tackling climate change through implementation of transformational country-led NAMAs (Nationally Appropriate Mitigation Actions). The NAMA Facility funds projects – so called NAMA Support Projects (NSPs) – that support the implementation of a Nationally Appropriate Mitigation Action (NAMA). NAMAs can function as important building blocks to implement Nationally Determined Contributions (NDCs) under the Paris Agreement.

The Paris Agreement, which entered into force on 4 November 2016, requires all Parties to the Convention to put forward their best efforts to address GHG emissions and climate change through “nationally determined contributions” (NDCs), and strengthen these efforts in coming years. Thailand’s Nationally Determined Contribution (NDC) envisions GHG emission reductions of at least 20% by the year 2030. Although agriculture is the second largest GHG emitting sector in Thailand, the agricultural sector hasn’t been included within the NDC. In 2014, nearly 60% of annual GHG emissions from the Thai agricultural sector were related to rice cultivation activities. Rice cultivation not only contributes to climate change, but is also highly vulnerable to adverse climate change impacts, which further emphasizes the importance for reduction of GHG emissions.

The Thai Rice NAMA project will support Thailand to achieve its Nationally Determined Contribution (NDC) and help raise awareness among rice farmers and relevant sector stakeholders to contribute to climate change mitigation. The project specifically seeks to assist 100,000 rice farmers in reducing Methane emissions generated from their rice production. The Rice Department (RD) under the MoAC, is a member of the National Committee on Climate Change as well as the main implementing agency for sustainable development of the rice sector. The RD contributes to the implementation of the Thai Rice NAMA project, together with GIZ. The GIZ is owned by the German government, and provides services in the field of international cooperation for sustainable development.

Out of 75 project outlines submitted in total, the NAMA Facility is supporting seven ambitious NAMA Support Projects (NSP) with funding for the Detailed Preparation Phase (DPP). Countries receiving support for the Detailed Preparation Phase include Brazil, Mexico (2 Projects), the Philippines, Thailand, Tunisia, and Uganda. The applications received by the NAMA Facility in the 4th Call illustrate the global reach and wide variety of actions targeted at emission reductions. Most national governments directly referred to their Nationally Determined Contributions (NDC) and the Paris Agreement in their applications.

The Thai Rice NAMA project has been accepted for the DPP phase from 19 May – 19 November 2017. At the end of the DPP, a detailed project proposal will be submitted for the final assessment and the NAMA Facility’s decision on funding for the project implementation. If approval is granted, the timeframe for the implementation of the project will be five years, starting in 2018.