Survey to develop training for farmers on integrated pest management

A pilot project soon to be established in Dong Thap province, Vietnam will assist Vietnamese farmers to tackle one of the country’s major threats to rice production, Brown Plant Hopper infestation. However, a survey to improve the ‘know-how’ in integrated pest management is firstly needed to design the right training for the farmers. This is to be conducted by the ASEAN Sustainable Agrifood Systems project, a module under an ASEAN-German Programme on response to Climate Change in Agriculture and Forestry (GAP-CC) and CropLife International.

Dong Thap province is the third largest rice growing region in the Mekong delta with 523,800 hectares of cultivated area. Three harvests per year require a very intensive cultivation, with high inputs of fertilizers and pesticides. In the past years, yields per hectare have been steadily increasing, reaching an average of 6.3 ton per hectares, which is above the national average of about 5 tons per hectares.

Intensive rice cultivation entails also increasing production costs, often caused by the high usage of seeds, fertilizers and chemical pesticides above the usual levels. Studies have shown that the overuse of chemical inputs can even have an adverse effect, leading to a decline of yields. Therefore it is of utmost importance to identify the optimum of the application of seeds and chemical inputs.

According to the Ministry of Agriculture and Rural Development, there are “inadequacies in pesticide advertising and labelling, while many farmers still continue to ignore basic instructions on their use”.

In Vietnam’s Dong Thap province, “Brown Plant Hopper” infestation and the following transmission of viruses is one of the major threats to rice production. Losses can be 100 per cent, if uncontrolled. Actually, the situation is under control, by light traps and the application of biological pesticides among others. Nevertheless, future outbreaks are possible as the insect is migrating fast over long distances. Because of its nature, infestation occurs at the whole growing area, which requires a strategy of including farmers’ communities, suppliers of agricultural inputs, and district and province authorities as well.

In general terms, the causes of the outbreaks include poor agronomic practices, poor choice of variety and, once an infestation is established, misuse of pesticides. The implementation of integrated pest management practices has proved unsustainable, since consistent messages have not been continually provided by all groups. Specifically the misuse or even illegal use of broad-spectrum, neuro-toxic insecticides needs to be addressed.

This requires not only the effective training of farmers, but also pesticide retailers who are a major source of pest management advice. According to the Ministry of Agriculture and Rural Development, there are “inadequacies in pesticide advertising and labelling, while many farmers still continue to ignore basic instructions on their use”. Training of retailers, which should be an integral part of government certification, would help to address this.

It is therefore proposed that the demonstration project be established in Dong Thap province, working with several villages where plant-hopper outbreaks are an issue, that will train farmers in integrated pest management including the responsible use of pesticides and the use of alternatives, including non-neuro-toxic and biocontrol agents, along with their integration and to train pesticide retailers in also integrated pest management, responsible pesticide use and responsible promotion of products.  The aim will be to set up a programme, where training messages are re-enforced by the local retailers, as well as other local partners such as the extension services and farmer organisations.

Other elements such as landscape engineering will be included in the information package presented to farmers; this will include how this can be used to encourage and maintain natural enemies, as well as possible negative impacts such as impacts on rat population. Farmers will be informed about such tools and techniques, but it will be their choice as to whether they adopt such approaches.

In general, even though the focus of the programme is management of plant-hopper attacks, in common with all integrated pest management programmes other pests that threaten the rice crop will be appropriately managed. 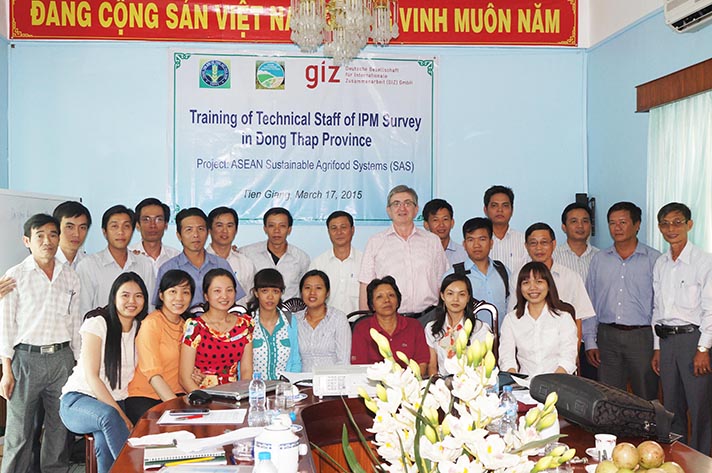 GIZ by its ASEAN Sustainable Agrifood Systems or in short SAS project and CropLife International agreed upon the conduction of a survey in Dong Thap province, Vietnam. This should be understood as a measure for the preparation of a wider capacity development programme. Plant Protection Department, its respective structures on national, provincial and local levels, and the Department of Agriculture and Rural Development of Dong Thap province will actively take part in the development of the activities. After the survey has been concluded, and conclusions and recommendations have been analyzed, the envisaged capacity development programme will be carried through.