Biological plant protection products are not new in the Thai market. However, due to stiff competition from chemical pesticides, lack of proper understanding of the biological crop protection application among farmers, and inconsistencies in the quality of the products themselves, they are not widely used.

Public and private sectors who recently met to develop Thailand’s “National Action Plan for the Promotion of BCA [biological control agents]” urged that BCA products should be better promoted as they are a green alternative that substitutes synthetic inputs in view of reduced health risks to farmers and negative environmental impacts. Biological plant protection utilizes nature’s own methods in the prevention of plant diseases and pests.

Department of Agriculture (DOA) of Thailand’s Ministry of Agriculture and Cooperatives and ASEAN Sustainable Agrifoods Systems (ASEAN SAS) Project, which is implemented by German International Cooperation (GIZ), brought together 35 Thai experts from 15 institutions to exchange their current practices and planned activities in promoting BCA for plant protection in the country. 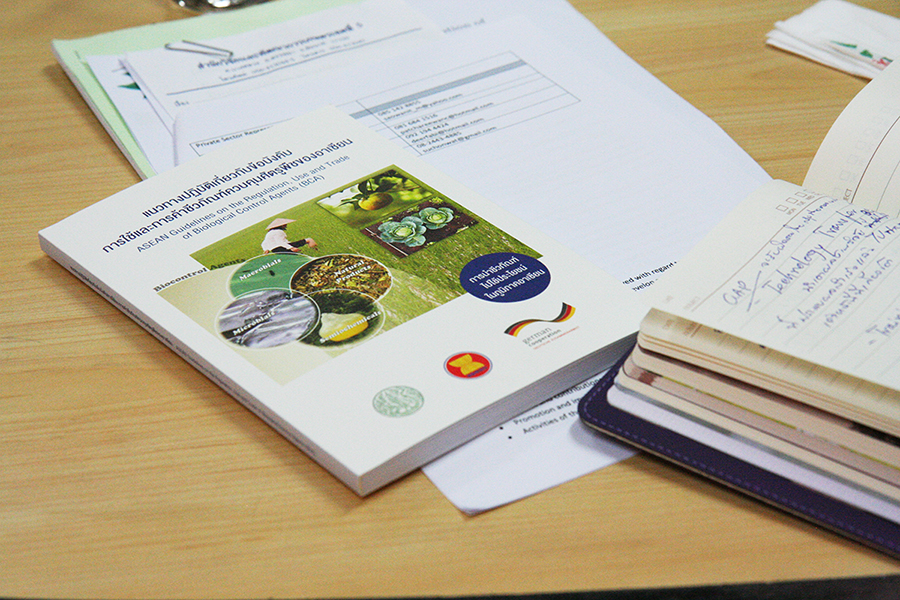 The experts met on 19 April 2016 for the third time to discuss potential solutions that hinder the use of BCA and together drafted the National Action Plan, which covered proposals for activities that the public and private sectors should implement for the promotion of BCA from 2016 to 2018.

The final draft of Thailand’s national action plan is expected to be completed in July 2016 and expected to be officially recognized by the DOA as part of Thailand’s contribution to the ASEAN Integrated Food Security (AIFS) Framework. Adopted by the ASEAN leaders in 2014, the AIFS Framework (2015-2020) was developed as a response to the need for an integrated approach and multi-stakeholder efforts towards sustainable food and nutrition security in the ASEAN region.

During the one-day meeting, Dr. Payorm Cobelly of the Rice Department shared that the Rice Department planned to conduct field trials next year in 2017 based on its laboratory research on biocontrol of Brown Planthopper and its heat tolerance since Thailand’s weather has become hotter recently.

“And if they turn out well, we hope that the [private] companies will come to us and scale up the research results,” said Dr. Payorm, the Agricultural Scientist.

For Thai Neem Products Co., Ltd. Mr. Chatri Jumpa-ngern noted to the meeting that his company would further promote neem in their already existing learning centre and that they would open more learning centres for training of farmers or interested individuals at no cost. However, the Managing Director of Thai Neem said that further support from the DOA in a form of easier registration and trade regulations on BCA would greatly help the company in their efforts.

Mr. Winai Rushtapakornchai, Development Manager of Thep Watana Co., Ltd., requested the government to raise awareness and provide knowledge of BCA and train farmers about the right understanding of BCA through extension programmes since this could push up demand.

He said farmers were confused about the labeling of many BCA due to inconsistent use of efficacy claims. “For instance, farmers did not understand the units used on labels like CFU, IU, etc., so   companies would use large numbers to imply better efficiency,” said Mr. Winai.

DOAE’s Chief of Biological Promotion Group Mrs. Areepan Upanisakorn further stressed trainings on application of BCA should be consistent so that farmers will not be confused and discouraged. “If one wants to promote BCA as the primary means in crop protection instead of synthetic pesticides, all actors have to speak with one voice,” she said.

For Ms. Porapa Nitkosakul, Marketing Manager of Appliedchem Co., Ltd., she said that this meeting helps her keep track on the national policy and the ongoing work of others, which is very beneficial for her company’s strategy and direction.