Lao’s pesticide decree uplifted and to be finalised soon

Department of Agriculture of Laos has recently completed a series of “Government Hearing Consultation Meetings on the Pesticide Decree for Synthetic Chemicals and Biological Control Agents” participated by 115 representatives from 16 provinces.

Lao PDR has 18 provinces including Vientiane as a capital province. 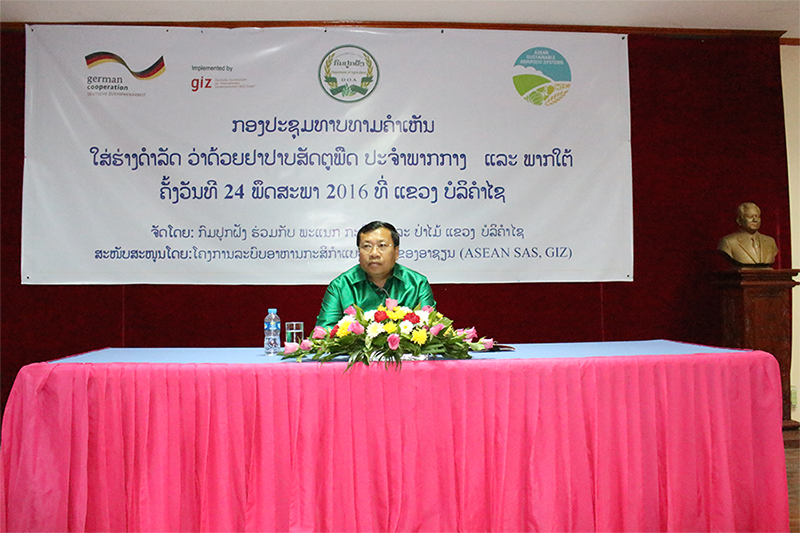 Pesticides are dangerous to human, animal and environment both in short and long terms. Pesticide residues also lead to rejections of export of agriculture produces. To manage the pesticides in Lao PDR, the Decree therefore has been developed in order to ensure the safety of the living beings and environment.

The Lao government has issued a mandate stating that the current Ministerial Regulation on pesticides must be uplifted to Prime Minister Decree in order for providing more powers and measures to assigned authorities in control of the synthetic chemical pesticides while promoting the biological agents that ASEAN Member States have already harmonising its regulatory framework through the ASEAN Guidelines on the Regulation, Use, and Trade of Biological Control Agents.

Further, the Pesticides Decree will create coordination mechanism for relevant government sectors to involve and participate in controlling not only the use of the pesticides but other related activities in relation to pesticides as production, sale, transportation, importation and disposal.

After the gathering of comments and recommendations gained from Provincial Agriculture and Forestry Offices, the Pesticide Decree will be considered by the committee.

Department of Agriculture with the support of the regional cooperation project “ASEAN Sustainable Agrifood Systems (ASEAN SAS)” organised two Government Hearing Consultation Meetings on the Pesticide Decree. The first meeting was conducted on 26th April 2016 in Bokeo province attended by 35 participants from six provinces of the northern part of Lao PDR, and the second meeting was conducted on 24th May 2016 in Bolikhamxay province with 80 participants from ten provinces in the central and southern parts of the country.

The participants requested the committee to look into comments and recommendations of the two consultation meetings to review technical words in the Pesticide Decree such as the words ‘Pesticide Decree’ and ‘Pests’ and check the whole contents in the Decree because there are overlapped in some Articles. Comments and inputs as technical support were also provided by experts from the ASEAN SAS.

The key recommendations from the two government hearing consultation meetings will be considered and incorporated into the final draft of the Pesticide Decree that will be finalised at the round table committee meeting to be organised in the near future.