Rice is one of the major crops both for Cambodia and South-East Asia. Since the agriculture sector struggles to meet the demand, the use of chemical inputs is increasing. Farmers believe that chemical inputs can foster productivity, eliminate pests and boost profit. However, improper use of synthetic pesticides and fertilizer may contribute to various problems including farm losses, ecological risks and health hazards. In addition, detected chemical residues in food can threaten export opportunities. Between 2006 and 2010, the value of synthetic pesticides imported into Cambodia and used for rice cultivation increased by 285 times (FAO 2012).

To address this concern, the ASEAN Sustainable Agrifood Systems (ASEAN-SAS) project by GIZ aims to provide solutions for long-term food security in Cambodia as well as in the whole ASEAN region through the development of regionally coordinated policies and strategies for sustainable agriculture. This also includes promotion of cross-border value chains in cooperation with public decision-makers, agricultural enterprises as well as farmer and private associations. Agrifood systems are sustainable when they are profitable along the value chain. The project focuses on three components comprising policy framework, production technology and market linkage.

In order to reduce the use of hazardous synthetic pesticides the project developed the ASEAN Guidelines on the Regulation, Use and Trade of Biological Control Agents (BCA) with regional experts. This Guideline was endorsed by ASEAN in 2014 which the projects supports to implement in Cambodia.

In 2015, two National fora on regulation, use and trade of Biocontrol Agents (BCA) were organized with cooperation between Ministry of Agriculture, Forestry and Fishery(MAFF), GIZ and Cambodia Harvest implemented by Fintrac Inc with the aim to provide an opportunity to different stakeholders for sharing successful experiences in agricultural production by using BCA, which are living organism, nontoxic mechanism and specify target enemy. Biocontrol Agents were group into 4 product categories as state as below:

They are most applicable in the context of appropriate Integrated Pest Management (IPM) strategies that emphasize preventative pest management: with regular observation of the crop and timely, targeted intervention only where required. 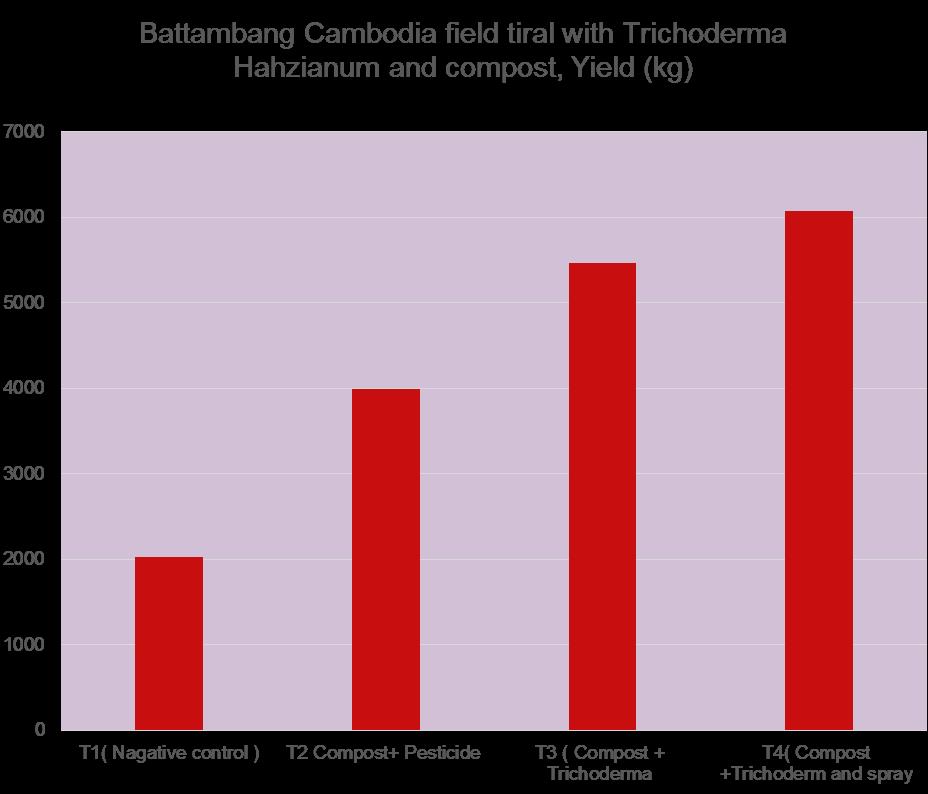 Trichoderma is one of BCA that can help farmers grow better crops and have higher income while protecting the soil environment. They are living freely in soil in agricultural and natural environments and permitted in organic farming according to international regulations. The best use of Trichoderma can be used as soil amendment, foliar spray and seed coating. It grows rapidly below 30 C temperature and 5-6.8 of pH soil.

In 2014, ASEAN-SAS supported field demonstrations of Trichodema with rice which was evaluated by the General Directorate of Agriculture (GDA) under MAFF (see table). As a result, using Trichoderma in combination with compost or manure can significantly boost yields up to 6 tons per hectare, healthy roots and resist to rice blast disease and drought.

Further it can premature harvest comparing to the control plot. GIZ developed a Manual on Trichoderma and can facilitate trainings on the application and advice where the product is available.

In 2016, the project plans field experiments with Matarhizum, which is found as effective BCA against the brown plant hoper, especially in rice production. The third national forum on regulation, use and trade of biocontrol agents in Cambodian Agriculture is planned in the beginning of 2016 in Phnom Penh. (www.crf.org.kh)