During the Meeting, Mr. Quy Duong Nguyen, Deputy Director General of Plant Protection Department from Vietnam addressed an overuse of chemicals in agriculture in the country and suggested further trainings for both farmers and chemical retailers to be responsible pesticide users to achieve sustainable agrifood production.

Supported by Croplife International in Vietnam, ASEAN SAS cooperates with the Can Tho University and the Cuu Long Delta Rice Research Institute to develop training modules for farmers and retailers in a programme called “Promotion of Integrated Pest Management to address plant hopper outbreaks in Rice”. It is expected that a minimum of 15,000 farmers and 300 pesticide retailers will be trained in agro-ecological practices and the effective use and safe application of pesticides.

“Pest is the huge issue in the ASEAN countries, and so does the education for the pesticide dealers. We should take this [further] to PPP [public private partnership], because this PPP allows us to tap on additional funds and investments from the private sectors, whose concerns are also raised exactly on that kind of point,” said Dr. Bickel.

The ASEAN SAS steering committee also discussed a potential improvement of a Good Agricultural Practices (GAP) system in Myanmar particularly on Mango and other crops besides the project’s priority crops (rice, vegetable, and fruit) and facilities for pesticide residue examination which was suggested by Mr. Aye Ko Ko, Deputy Director General of Department of Agriculture from Myanmar.

To improve the GAP system in Myanmar, Dr. Bickel again emphasised the role and cooperation of the private sector would deem significant. In addition, internal discussion would be further conducted upon Myanmar’s request regarding guidance on technical knowledge and facilities for the pesticide residue examination.

“To link the various activities to PPP…that is exactly the approach we are trying to take stronger and stronger to incorporate the biocontrol, farm economies, nutrient management in supply chain.

“[Also] By being able to test the residue level on spot is to make longer sustainable chain, upgrading the supply chain, enabling the farmers and all the traders to really check on spot, and avoiding the cargoes to be rejected. That’s one of the most important issues in ASEAN region,” said Dr. Bickel.

Mr. Aye Ko Ko from Myanmar also showed interests in improving crop insurance mechanism in the country. He said around 800,000 acres of rice field were destroyed by the change of climate last year.

Ms. Wilma Cuaterno, Chief of Crop Pest Management Division, Bureau of Plant Industry, Philippines shared a story about the crop insurance in her country. She said the crop insurance covered not just crops, but also fish and livestock, and it is being subsidized by the government.

“Two years ago, we talked with the insurance companies, and they doubted that they wanted to erase insurance on pests and diseases because they said that there were some strategies and technology that could really control our management in pests and diseases, and they just wanted to concentrate on natural calamity, because Philippines were very prone to disaster,” she said.

The 7th Steering Committee Meeting of the ASEAN SAS was held on 17 June 2016 in Bangkok, Thailand and attended by steering committee members (focal points) from the eight ASEAN countries with the exception of Brunei Darussalam and Singapore and representative from Project Coordination Unit (PCU) of ASEAN SAS project as members of Project Steering Committee.

Malaysia will host the 8th Steering Committee Meeting in December 2016. 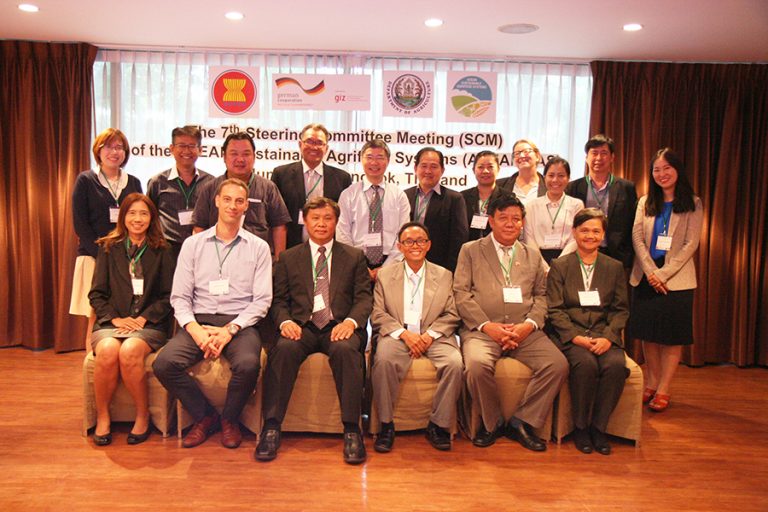