Mr Sun Song is a farmer in the Siem Reap province in Cambodia. He has been using an organic fertilizer and pesticide called Trichoderma to protect his cucumbers and string beans from harmful fungal infestation and to improve the growth of his crops for the past year. 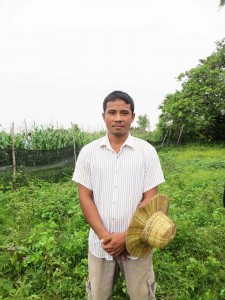 Trichiderma is a green fungi naturally living in the soil. Before using Trichoderma, Mr Song applied chemical pesticides to control diseases. Trichoderma can be mixed with compost and distributed on the field to improve the soil quality and control harmful fungi, Mixed with water, it can also be used for seed coating to accelerate germination and protect the seed against pathogens. Or, it can be directly sprayed on infested plants.

Asking Mr Song about the differences, he says: “Now my kids are allowed to play in the fields.”

Due to the fertilizing effects of Trichoderma, Mr Song also says: “The crop is healthier and also looks better.”

Mr Sun Song’s yield is higher and because his vegetables are of better quality now that he does not need additional synthetic pesticides, he earns about 200 riel (approximately US$ 0.05) more per kg compared to other farmers.  Smiling diffidently, he tells that he also receives support from customers that recently called to ask for his vegetables.

Mrs Choun Yan farms since her childhood. As Mr Song, Mrs Yan started using Trichoderma-based products last year. Even before the harvest, she could see the changes. Previously, Mrs Yan had problems with diseases, mainly fungi. Since the application of Trichoderma, she does not have that problem anymore. In addition, she estimates an increase in her cucumber yield from 1 to about 1.5 tons, while the input costs for pesticides and fertilizer are reduced.

In supporting the farmers’ use of Trichoderma and other biocontrol agents (BCAs), GIZ’s ASEAN Sustainable Agrifood Systems’ project (ASEAN SAS) provides capacity development measures, technical know-how, and establishes a national network and discussion forum to enhance learning among farmers and relevant stakeholders. In this respect GIZ, in collaboration with HARVEST Cambodia (USAID funded) and the Cambodian’s Ministry of Agriculture, Forestry and Fisheries (MAFF), organized the 2nd National Biocontrol Agents (BCA) Forum in Siem Reap, Cambodia on 28-29 July 2015 bringing public sector and other regulators, practitioners, extension workers, academia and the private sector together to share experiences and present BCA-related products. 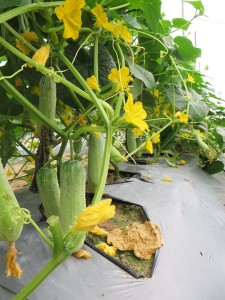 One of the forum’s participants, Dr. Kean Sophea, Deputy Director of the General Directorate of Agriculture, Department of Agriculture, Forestry and Fisheries from Cambodia and his team have been conducting research on Trichoderma in the past ten years.

“So far, a lot of chemicals are used with bad effects. I think the better way is to use organic fertilizer, as it is safe for people and the environment,” says Dr. Sophea.

During the ten years, he and his team have experimented Trichoderma with different kinds of value crops such as vegetables, rice, fruit trees and black pepper. All showed better yields by about 20 to 30 per cent compared to the control groups.

Durians, for example, do not only yield better and give more fruits, but also mature earlier. Dr. Sophea emphasizes that there are no known negative effects to humans of the application of Trichoderma. However, it would not be advisable to eat or inhale the spores of the fungus. Farmers are advised to store the product safely and use protective masks while spraying.

To demonstrate the practical application and the benefits of Trichoderma, field visits were part of the the 2nd National BCA Forum’s agenda. At the farmlands of Mr Song and Mrs Yan more than 150 participants witnessed the usefulness of green fungi and earned their own impressions of what BCA have to offer.

How Trichoderma works:
• Competition: Trichoderma is a parasite to other fungi. It spreads rapidly, covers and destroys the harmful fungi without damaging the plant.
• Growth Promotion: Trichoderma affects the root system of the plant. The roots grow stronger and deeper. It also treats root injuries so the plant can take up nutrients more effectively and resistance against drought is increased.
• Antibiosis: Trichoderma produces chemical compounds (metabolites) that inhibit or kill other microorganisms. These compounds are also known as antibiotics.”